Genotype: the specific alleles of an organism.

Phenotype: the observable characteristics or traits of an organism.

Recessive allele: an allele that only has an effect on the phenotype when present in the homozygous state.

Co-dominant alleles: pairs of alleles that both affect the phenotype when present in a heterozygote.

(The terms incomplete and partial dominance are no longer used.)

Locus: the particular position on homologous chromosomes of a gene.

Homozygous: having two identical alleles of a gene.

Heterozygous: having two different alleles of a gene.

Carrier: an individual that has one copy of a recessive allele that causes a genetic disease in individuals that are homozygous for this allele.

Test cross: testing a suspected heterozygote by crossing it with a known homozygous recessive.

∑ - Mendel discovered the principles of inheritance with experiments in which large numbers of pea plants were crossed.

∑ - Watch this video on Gregor Mendel and write down a couple of interesting facts https://www.youtube.com/watch?v=GTiOETaZg4w

∑ - Gametes are haploid so contain only one allele of each gene.

∑ - The two alleles of each gene separate into different haploid daughter nuclei during meiosis.

∑ - Fusion of gametes results in diploid zygotes with two alleles of each gene that may be the same allele or different alleles.

One example is seed colour. In pea plants, yellow seeds are dominant over green peas.
If a pea plant that is heterozygous for yellow peas is crossed with a plant with green peas, what are the genotypes and phenotypes of the first generation (F1) of pea plants?

The following are steps to solve the above problem.

2)    Write out the parental cross using the key you created. In this case, the cross would be Yy x yy. This cross is a heterozygous x homozygous recessive cross.

3)    Write down the possible genotypes of the gametes. In this case, they would be Y and y from the yellow plant and only little y from the green pea plant as that is the only type of allele.

1)    In dogs, short hair is dominant over long hair. Two heterozygous short-haired dogs are mated. What are the genotypic and phenotypic ratios of the puppies? What is the probability that the fourth puppy has long hair? Show all your work using a Punnett square.

2)    A woman that has blood type AB and a man that is homozygous for blood type A, have 4 children. What are the possible genotypes and phenotypes of the offspring? What is the probability they will have a child with the blood type O? Show all work using a Punnett square.

Come back and do this question after we do sex-linked inheritance.

3)    A man with hemophilia (a recessive, sex-linked trait condition) has a daughter with a normal phenotype (hint she must be heterozygous). She marries a man who is normal for the trait. What is the probability that a daughter of this mating will be a hemophiliac? That a son will be a hemophiliac? List the possible genotypic and phenotypic ratios. Show all your work using a Punnett square.

Do the lab on genetic crosses and probabilities using coin flips

∑ - Some genetic diseases are sex-linked. The pattern of inheritance is different with sex-linked genes due to their location on sex chromosomes.

As you can see above both daughters will be carriers and both males will have normal vision. This would be the same Punnett square for Hemophilia (Xh y x XH XH).

** X^b and X^h is the notation for the colorblind and hemophilia alleles. The corresponding dominant alleles are X^B and X^H **

β - Skill: Analysis of pedigree charts to deduce the pattern of inheritance of genetic diseases.

Pedigree charts or diagrams display all of the known genotypes for an organism such as humans and their ancestors.

Explanation of a Pedigree

How to Determine a Pedigree

For co-dominance, the main letter should relate to the gene and the suffix to the allele; both upper case. For example, Roan horses that are co-dominant could be represented as R^B and R^w, respectively. For sickle-cell anemia, HbA is normal and Hbs is sickle cell.

∑ - Many genetic diseases have been identified in humans but most are very rare.

∑ - Radiation and mutagenic chemicals increase the mutation rate and can cause genetic diseases and cancer.

β - Application: Consequences of radiation after the nuclear bombing of Hiroshima and accident at Chernobyl.

https://www.youtube.com/watch?v=YfulqRdDbsg  Called Inside Chernobyl – quite a good film by an amateur filmmaker. There are some disturbing images.

****Write 10 facts regarding the consequences of the nuclear bombs in Japan and the nuclear accident in Chernobyl. ****

Essential idea: Alleles segregate during meiosis allowing new combinations to be formed by the fusion of gametes.

∑ - The halving of the chromosome number allows a sexual life cycle with the fusion of gametes.

Do data-based question on page 161.

∑ - DNA is replicated before meiosis so that all chromosomes consist of two sister chromatids.

∑ - The early stages of meiosis involve the pairing of homologous chromosomes and crossing over followed by condensation.

∑ - Orientation of pairs of homologous chromosomes prior to separation is random.

∑ - Separation of pairs of homologous chromosomes in the first division of meiosis halves the chromosome number.

β - Skill: Drawing diagrams to show the stages of meiosis resulting in the formation of four haploid cells.

Interphase (interphase is not a part of meiosis

Replication occurs before meiosis during interphase.

fibres from the centrosomes at each pole.

are pulled towards the opposite poles.
At this point, the chromatids are considered chromosomes again.

β - Application: Non-disjunction can cause Down syndrome and other chromosome abnormalities.

Article on parents living with a son for 47 years with Down syndrome http://www.dailymail.co.uk/femail/article-2803834/I-wish-d-aborted-son-ve-spent-47-years-caring-s-shocking-admission-read-judge.html

What would you do if you had that choice?

Do the questions on incidences of non-disjunctions on page 167 of your text.

• Preparation of microscope slides showing meiosis is challenging and permanent slides should be available in case no cells in meiosis are visible in temporary mounts.

• Drawings of the stages of meiosis do not need to include chiasmata.

• The process of chiasmata formation need not be explained.

Theory of knowledge: In 1922 the number of chromosomes counted in a human cell was 48. This remained the established number for 30 years, even though a review of photographic evidence from the time clearly showed that there were 46. For what reasons do existing beliefs carry certain inertia? 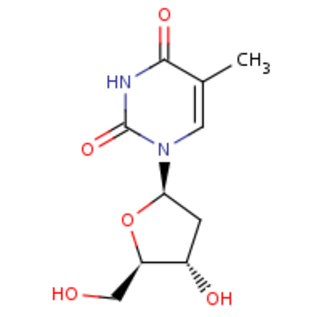 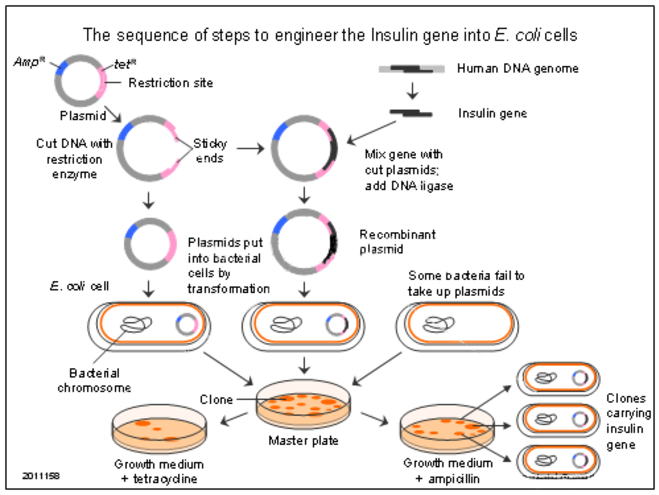 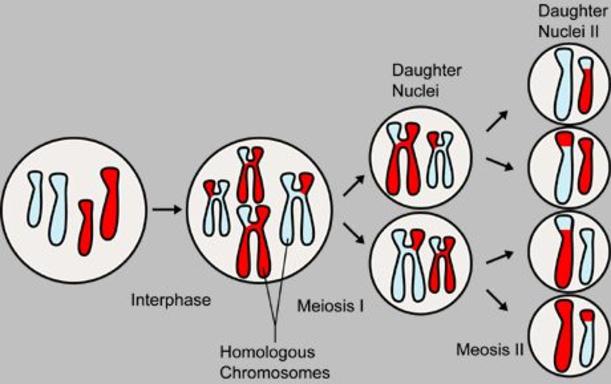 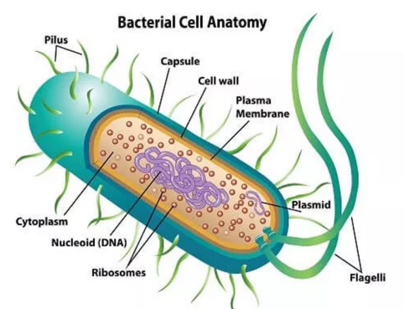 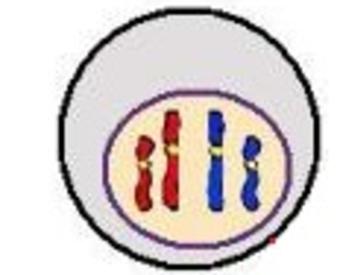 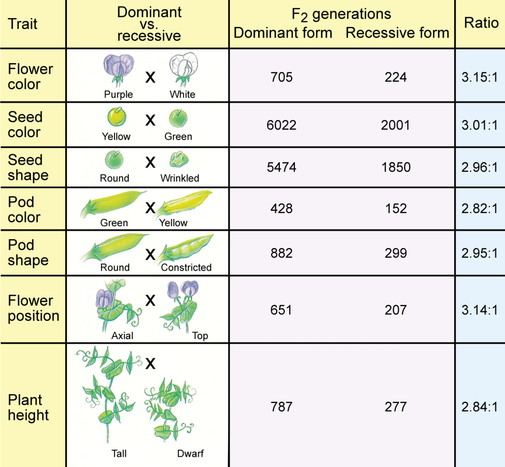 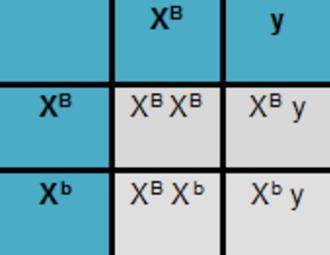 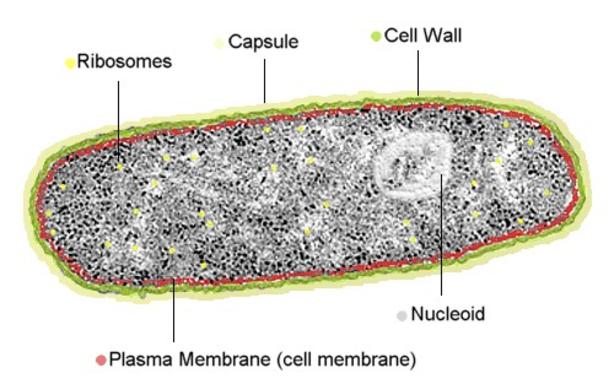 ∑ - Prokaryotes have one chromosome consisting of a circular DNA molecule.

∑ - Some prokaryotes also have plasmids but eukaryotes do not.

β - Application: Cairns’ technique for measuring the length of DNA molecules by autoradiography.

∑ - In a eukaryote species there are different chromosomes that carry different genes.

∑ - Homologous chromosomes carry the same sequence of genes but not necessarily the same alleles of those genes.

B - Use of online databases to identify the locus of a human gene and its protein product.

∑ - Haploid nuclei have one chromosome of each pair.

∑ - The number of chromosomes is a characteristic feature of members of a species.

∑ - A karyogram shows the chromosomes of an organism in homologous pairs of decreasing length.

∑ - Gel electrophoresis is used to separate proteins or fragments of DNA according to size.

∑ - PCR can be used to amplify small amounts of DNA.

Steps to identifying an unknown individual

∑ - Genetic modification is carried out by gene transfer between species.

Read the short paragraph on assessing the risks of genetically modified crops or livestock on page 192. Write a very brief summary below

β - Application: Assessment of the potential risks and benefits associated with genetic modification of crops.

β - Skill: Analysis of data on risks to monarch butterflies of Bt crops.

∑ - Many plant species and some animal species have natural methods of cloning.

β - Skill: Design of an experiment to assess one factor affecting the rooting of stem-cuttings.

***Design your own experiment to investigate a factor that affects the rooting of stem-cuttings. The lab will be graded according to the IB internal assessment rubric***

∑ - Animals can be cloned at the embryo stage by breaking up the embryo into more than one group of cells.

• Students should be able to deduce whether or not a man could be the father of a child from the pattern of bands on a DNA profile.

• Dolly can be used as an example of somatic-cell transfer.

• A plant species should be chosen for rooting experiments that form roots readily in water or a solid medium. 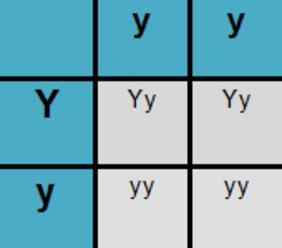 ∑ - A gene is a heritable factor that consists of a length of DNA and influences a specific characteristic.

How many genes do other organisms have?

∑ - A gene occupies a specific position on a chromosome.

Example of human chromosome 7 from http://users.rcn.com/jkimball.ma.ultranet/BiologyPages/C/Chromo7.gif

∑ - The various specific forms of a gene are alleles.

∑ - Alleles differ from each other by one or only a few bases.

β - Application: Comparison of the number of genes in humans with other species.

B - Skill: Use of a database to determine differences in the base sequence of a gene in two species.

Go to http://www.ncbi.nlm.nih.gov/ and follow the procedure of comparing two gene sequences in your textbook on page 144.

Do that data-based questions on page 145

Good link on malaria and sickle cell anemia in Africa


∑ - The genome is the whole of the genetic information of an organism.

∑ - The entire base sequence of human genes was sequenced in the Human Genome Project.

What they found: Most of the genome does not code for proteins (originally labeled “junk DNA”). Some of these regions consist of areas that can affect gene expression or are highly repetitive sequences called satellite DNA.

A complete description of the Human genome project can be found at   http://www.genome.gov/10001772

Notes from the IBO

• Students should be able to recall one specific base substitution that causes glutamic acid to be substituted by valine as the sixth amino acid in the hemoglobin polypeptide.

• The number of genes in a species should not be referred to as genome size as this term is used for the total amount of DNA. At least one plant and one bacterium should be included in the comparison and at least one species with more genes and one with fewer genes than a human.

• The Genbank® database can be used to search for DNA base sequences. The cytochrome C gene sequence is available for many different organisms and is of particular interest because of its use in reclassifying organisms into three domains.

• Deletions, insertions and frameshift mutations do not need to be included 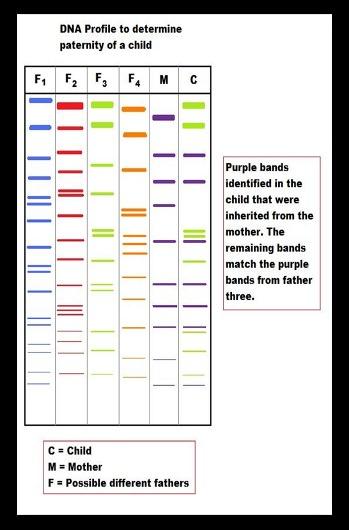 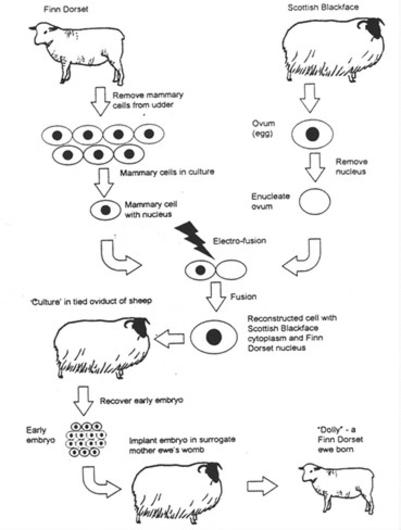 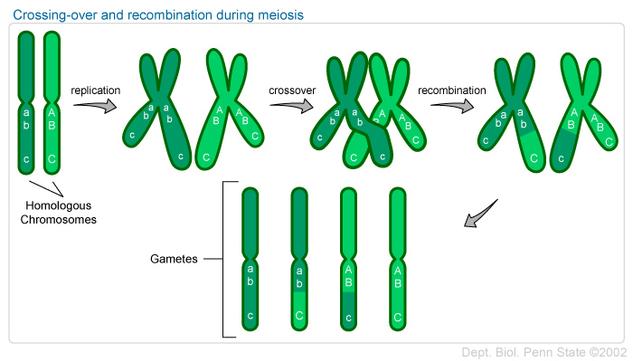 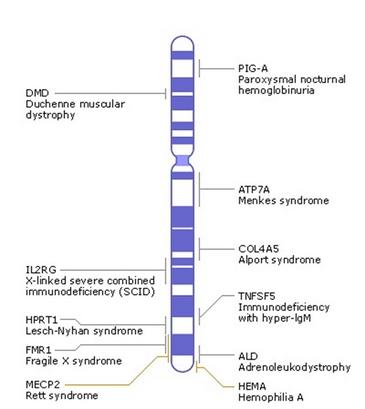 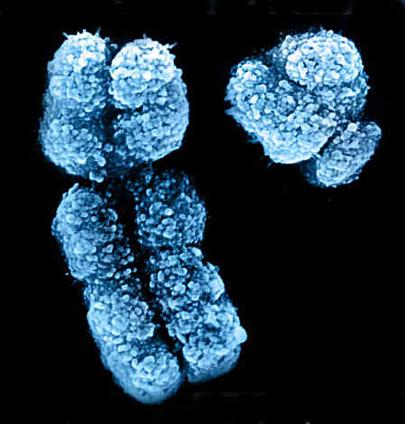 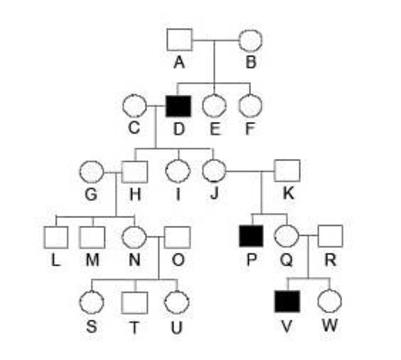 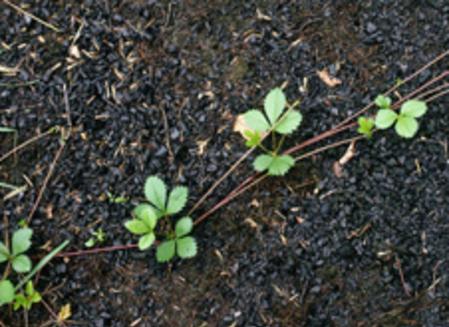 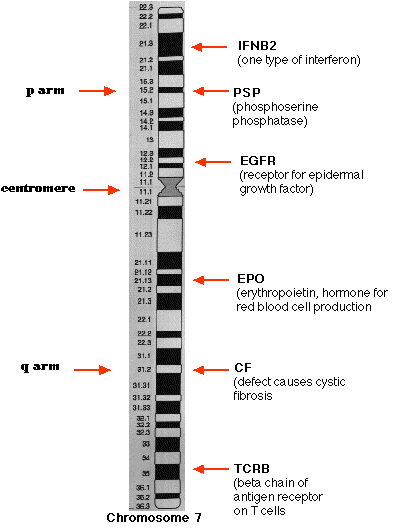 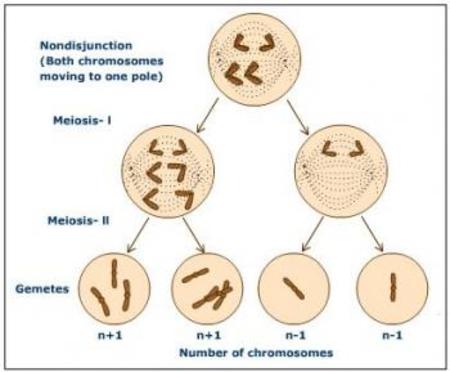 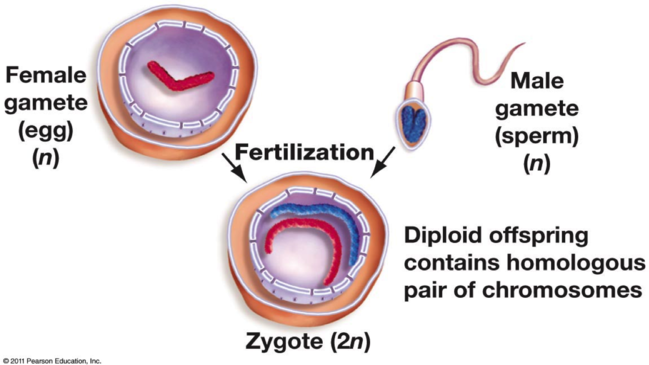 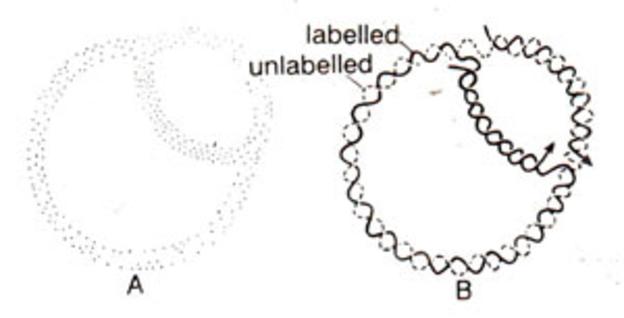 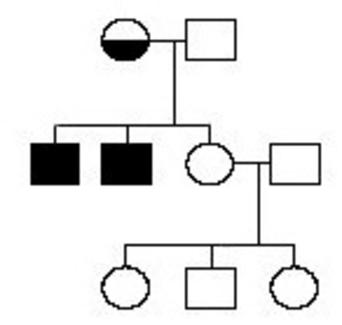 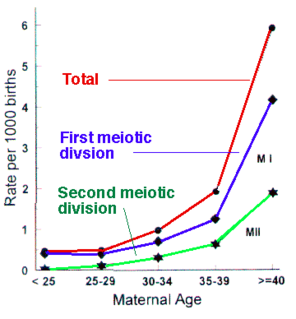 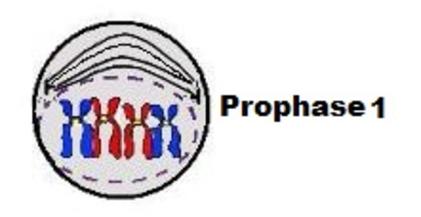 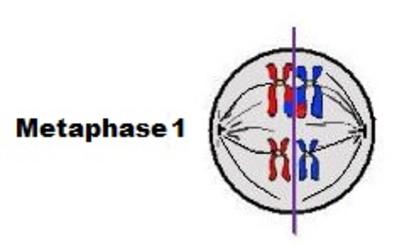 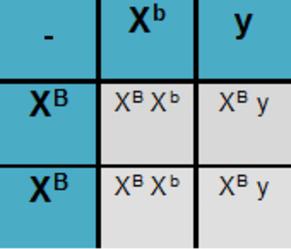 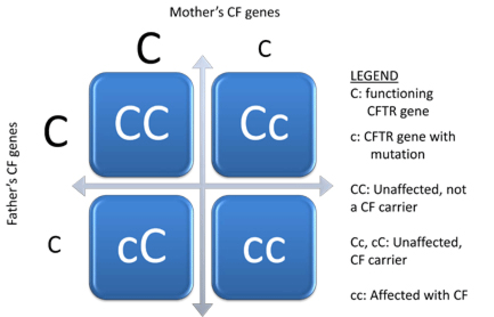 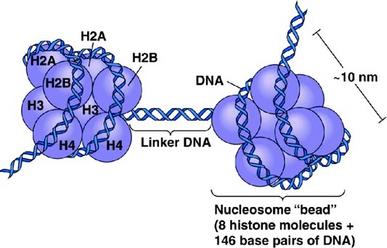 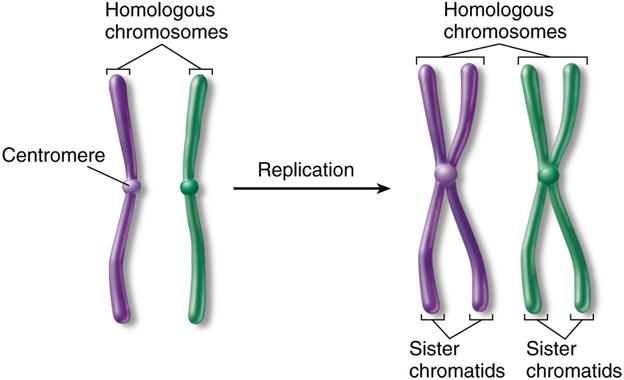