∑ - Transpiration is the inevitable consequence of gas exchange in the leaf.

∑ - Plants transport water from the roots to the leaves to replace losses from transpiration.

∑ - The cohesive property of water and the structure of the xylem vessels allow transport under tension.

∑ - Active uptake of mineral ions in the roots causes absorption of water by osmosis.

β - Application: Adaptations of plants in deserts and in saline soils for water conservation.

Xerophytes are plants that are adapted to grow in very dry conditions.

Conifers and cactus plants both have reduced leaves; conifers have needles and cacti have spines. This decreases the surface area available for transpiration, thus decreasing water loss.

Stomata exist inside of rolled leaves. This creates local humidity within the rolled leaf, thus decreasing the leaf’s exposure to air currents because water vapour evaporates into the small air space inside the rolled leaf rather than the atmosphere. This decreases water loss through transpiration.

Some xerophytes have a reduced number of stomata. By reducing the number of stomata, water loss through transpiration is decreased because there are fewer holes for evaporation to take place.

Thick waxy cuticle makes the leaves and in some cases stems, more waterproof and impermeable to water. This prevents water loss through the epidermal cells.

Stomata in pits surrounded by hair

Nature of science:Use models as representations of the real world—mechanisms involved in water transport in the xylem can be investigated using apparatus and materials that show similarities in structure to plant tissues.

β - Skill: Drawing the structure of primary xylem vessels in sections of stems based on microscope images.


∑ - Active transport is used to load organic compounds into phloem sieve tubes at the source.

∑ - High concentrations of solutes in the phloem at the source lead to water uptake by osmosis.

∑ - Raised hydrostatic pressure causes the contents of the phloem to flow towards sinks.

β - Skill: Identification of xylem and phloem in microscope images of stem and root.

9.3 Growth in plants:  Plants adapt their growth to environmental conditions.

Nature of science:   Developments in scientific research follow improvements in analysis and deduction—improvements in analytical techniques allowing the detection of trace amounts of substances has led to advances in the understanding of plant hormones and their effect on gene expression.

∑ - Mitosis and cell division in the shoot apex provide cells needed for the extension of the stem and development of leaves.

∑ - Plant hormones control growth in the shoot apex.  Auxin is the only named hormone that is expected.

∑ - Plant shoots respond to the environment by tropisms.

For gravitropism, auxin is redistributed to the side of gravity
Auxin, in this case, inhibits cell elongation and as the top part of the root grows and extends, the root turns towards the direction of the gravitational pull
This is the opposite to phototropism

β - Application: Use of micropropagation for rapid bulking up of new varieties, production of virus-free strains of existing varieties and propagation of orchids and other rare species.

β - Skill:  Investigations into tropisms could be carried out.

Could develop a lab with tropisms to use for the internal assessment
Theory of knowledge:  Plants communicate chemically both internally and externally. To what extent can plants be said to have language?

Video on if plants can talkhttps://www.youtube.com/watch?v=_yEJxvymDcE

∑ - Flowering involves a change in gene expression in the shoot apex.

∑ - The switch to flowering is a response to the length of light and dark periods in many plants.

∑ - Flowering in so-called short-day plants such as chrysanthemums is stimulated by long nights rather than short days.

∑ - Understand the differences between pollination, fertilization and seed dispersal

∑ - Most flowering plants use mutualistic relationships with pollinators in sexual reproduction.

β - Application: Methods used to induce short-day plants to flower out of season.

Growers can influence flowering of flowers out of season, by controlling the length of days and nights
This is useful to produce flowers out of season used during specific holidays
Florists can use this to cause certain flowers such as Poinsettias to flower earlier in the season (Thanksgiving instead of just Christmas)

Nature of science: Paradigm shift—more than 85% of the world’s 250,000 species of flowering plants depend on pollinators for reproduction. This knowledge has led to protecting entire ecosystems rather than individual species.

β - Application:  The University of Göttingen, in Germany, conducted an extensive review of scientific studies from 200 countries for 115 of the leading global crops in 2005. They found that 87 of the crop plants depend to some degree upon animal pollination, including bees. This accounts for one-third of crop production globally.

Seeds need water for germination. Water rehydrates the seed’s tissues causing the cells to expand and metabolism to become reactivated.
Once metabolism has been reactivated embryonic growth can begin.
The appropriate temperature is needed to allow enzymes to work efficiently during metabolic reactions.
O2 is needed for aerobic respiration to take place in the seed.
Some plants have seeds that require specific variables in order for germination to take place, such as fire or smoke, disruption of the seed coat, or removal of surface inhibitors by water.
•     Water is absorbed by the seed through the micropyle and the seed coat.

•     Water causes the release of a hormone called gibberellin or gibberellic acid (GA).

•     GA causes the cells to expand and elongate, eventually allowing the root to break through the seed coat (testa).

•     GA also stimulates the production of enzymes (specifically amylase) that hydrolyze starch located in the seed’s endosperm into maltose.

•     Maltose is further broken down into glucose which can be transported to areas of growth in the cell.

•     Glucose is used in aerobic respiration to produce energy for the growth of the embryonic root and shoot. 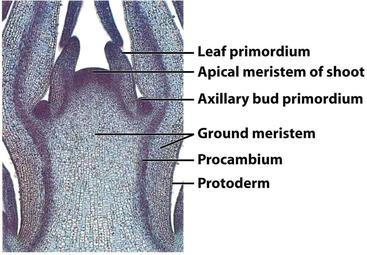 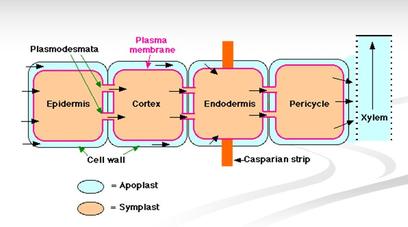 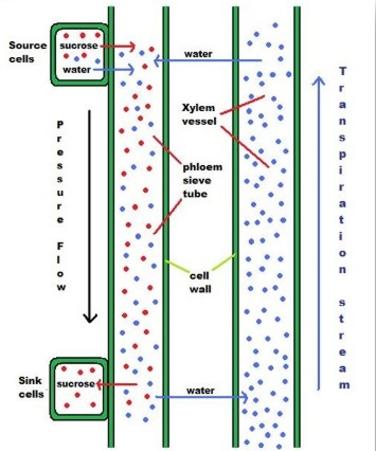 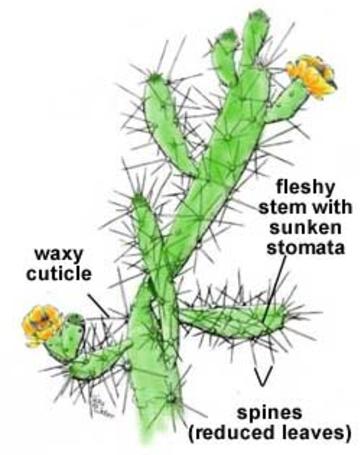 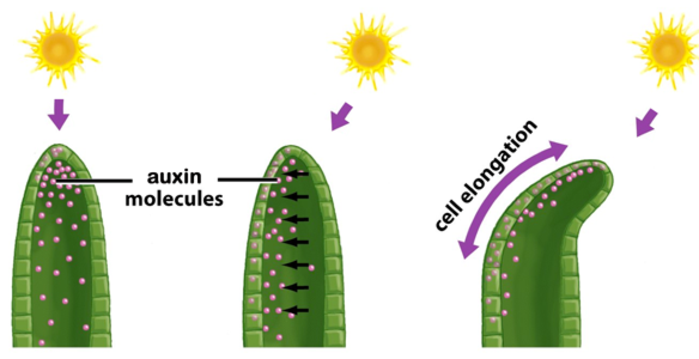 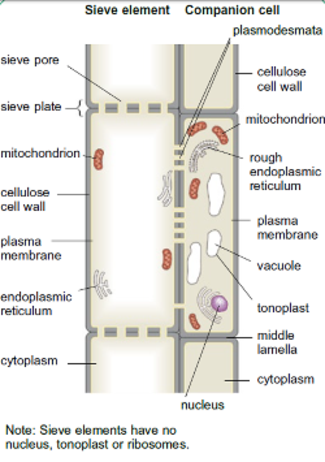 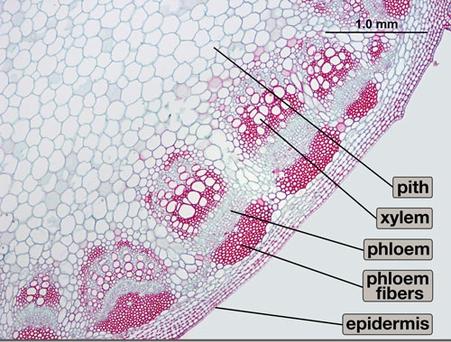 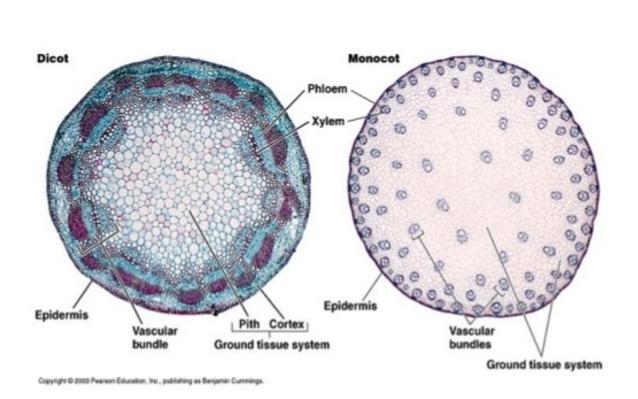 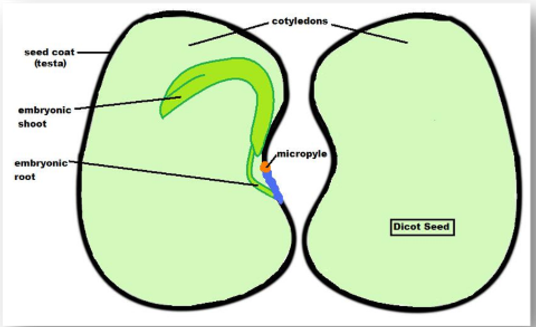 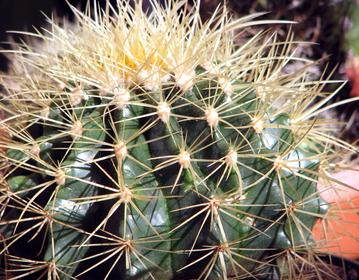 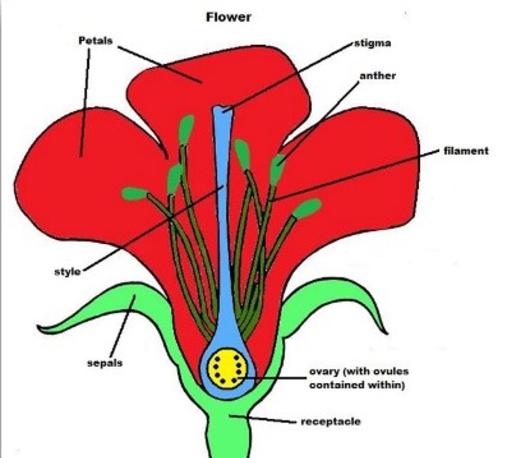